How SILC is Changing Lives for the better in Communities Featured

Written by Super User
Rate this item
(0 votes)
Savings and Internal Lending Communities (SILC), is a key component of the Caritas Nigeria sustainable livelihood strategy, which encourages households to cultivate the culture of saving, even from the little resources that they make as proceeds from their businesses. The SILC methodology is a holistic, savings-led microfinance approach that provides a safe place for poor households to save and borrow money to increase their income. It is rooted in the traditional community-based rotating savings and credit associations, that helps poor communities create sustainable, transparent and accessible savings platform that is managed by members of the group.Over the years, Caritas Nigeria has established and worked with more than 700 SILC groups in different communities across Nigeria, teaching them financial management to ensure sustainable livelihoods of beneficiaries and to address poverty which has plagued the country for many years now.
According to the World Bank Report of May 28, 2020, the level of poverty continues to rise in Sub-Saharan Africa. Nigeria with an estimated population of 200 million, has 40% of the total population (83 million Nigerians) living below the country’s poverty line of $381.75 per year (137,430 naira).
The standard of living has been on the decline, due to the many developmental challenges such as insecurity, a rise in unemployment, poor governance, lack of infrastructural facilities, poor financial management systems, weak & inefficient institutions amongst others.In this era of the COVID-19 pandemic, the effect of the lockdown which ground to a halt most economic activities, has been really tough on citizens who rely on day jobs and small businesses to earn a living. With little or no support from the government, most communities have been striving to survive on what they have been able to save as there was a complete restriction on movement.Nonetheless, in response to the current poor economic situation of families, Caritas Nigeria together with its partners, has been working to reduce the effect of poverty on vulnerable households through several methods, including the Savings and Internal Lending Communities (SILC) methodology across communities in Nigeria. The over 700 SILC groups established by Caritas Nigeria have been a great resource for community members in these trying times, one of such SILC groups making tremendous progress across projects, is the Albarka SILC group in Madagali town of Adamawa State, Nigeria.
The Albarka SILC group which was formed in 2019, has become a pacesetter amongst the 80 groups of the project on Protection and Assistance to Persons of Concern (PoC) through Livelihoods Support. This project which is funded by the United Nations High Commissioner for Refugees (UNHCR), has so far in one year, supported 4,900 households (an average of 29,400 individuals) through skill acquisitions, agricultural input distributions, livestock rearing and small grants to beneficiaries across 7 Local Government Areas (LGAs) in Adamawa and Borno States, Nigeria.
The Albarka SILC group, is indeed a leading success story for the SILC methodology, as seen in the life-changing situations of their members after they became beneficiaries of the Caritas Nigeria interventions. It is admirable to see their proper conduct and the huge savings, that members have benefitted from, during share-out which is the completion of the saving cycle, when profit made from contribution is shared among members of the SILC group, usually between 8 to 10 months.

More in this category: Dinatu's testimony » 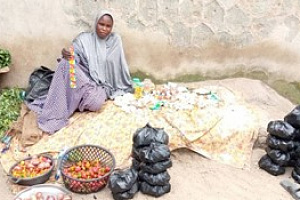 A mother of 5 now a successful business owner 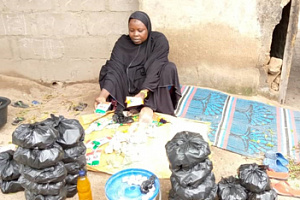 The journey from begging to becoming a successful entrepreneur 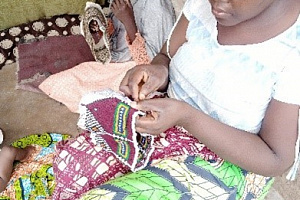